Palliser novels. Can You Forgive Her? Part 2 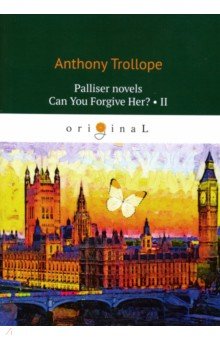 Автор: Trollope Anthony
Издательство: Т8
Год издания: 2019
ISBN: 978-5-521-08320-6
Серия: Original
889 руб. Купить
Anthony Trollope (1815-1882) was an English novelist of the Victorian era. Among his best-known works is a series of novels collectively known as the Chronicles of Barsetshire, which revolves around the imaginary county of Barsetshire. "Can You Forgive Her? " is the first of six novels in another famous series, "The Palliser Novels, " also known as the Parliamentary Novels. The novel follows three parallel stories of courtship and marriage and the decisions of three strong women: Alice Vavasor, her cousin Glencora Palliser, and her aunt Arabella Greenow.